Life of SQL from the eyes of the aspirants!

SQL is a domain specific language that enables its users to access the database, manage data and represent it in a particular manner. SQL classes will make you understand how to organize the gathered information with SQL platform that associates with front-end and bake-end database. To manage the large quantity of data, relational database management systems are used which are MySQL, Oracle, and Microsoft SQL server database. 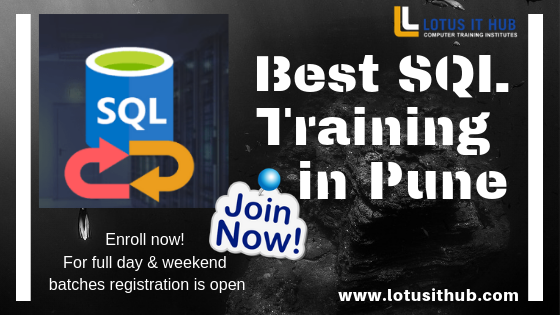 SQL was developed in IBM at the early 1970s for accessing and modifying data held in the database. Initially, SQL is called as SEQUEL (Structured English Query Language) which later termed as SQL into an official standard for the ANSI (American National Standard Institute) and ISO (International Organization for Standardization). SQL (Structured Query Language) is a standardized programming language that manages the rational database by performing various operation on the data. What are those operations? And how to perform them? Are the important things which aspirant can learn at SQL classes in Pune.

What is the difference between SQL and MySQL?

SQL and MySQL both are the most popular choices for the data management but there is a fine line between them that you can learn at SQL coaching to separate them from one another.

These are the basic feature that experts from our SQL coaching classes will explain you in an elaborate manner with the practical examples.

SQL utilizes numerous commands for the query execution that allows you to interact with data. All these commands manage and modify the vast volume of data effortlessly, and you will learn to execute these commands seamlessly at SQL training institute in Pune; here are some of the commands: SELECT, DELETE, CREATE DATABASE, INSERT INTO, ALERT DATABASE, CREATE TABLE, CREATE INDEX and more.

SQL is a universal open-source language that manages a million rows of data with technology evolution in a simplified manner. In this digitalized world every business is demanding a digital means of data for which SQL is the only ultimate solution. SQL is the magnificent and valuable language that every business desire to implement and for that query application as per the data storage demand is taught only at the LotusITHub situated at Karve Nagar, Narhe, Warje, Dhayari, Sinhgad road, and Kothrud.

LotusITHub is the renowned SQL coaching institute with the branches available at Narhe, Karve Nagar and all the above-mentioned places with the expert’s guidance. Aspirant can visit our SQL training institute for the detailed inquiry and can be a part powerful technology that can empower you to manage and store the huge quantity of data.